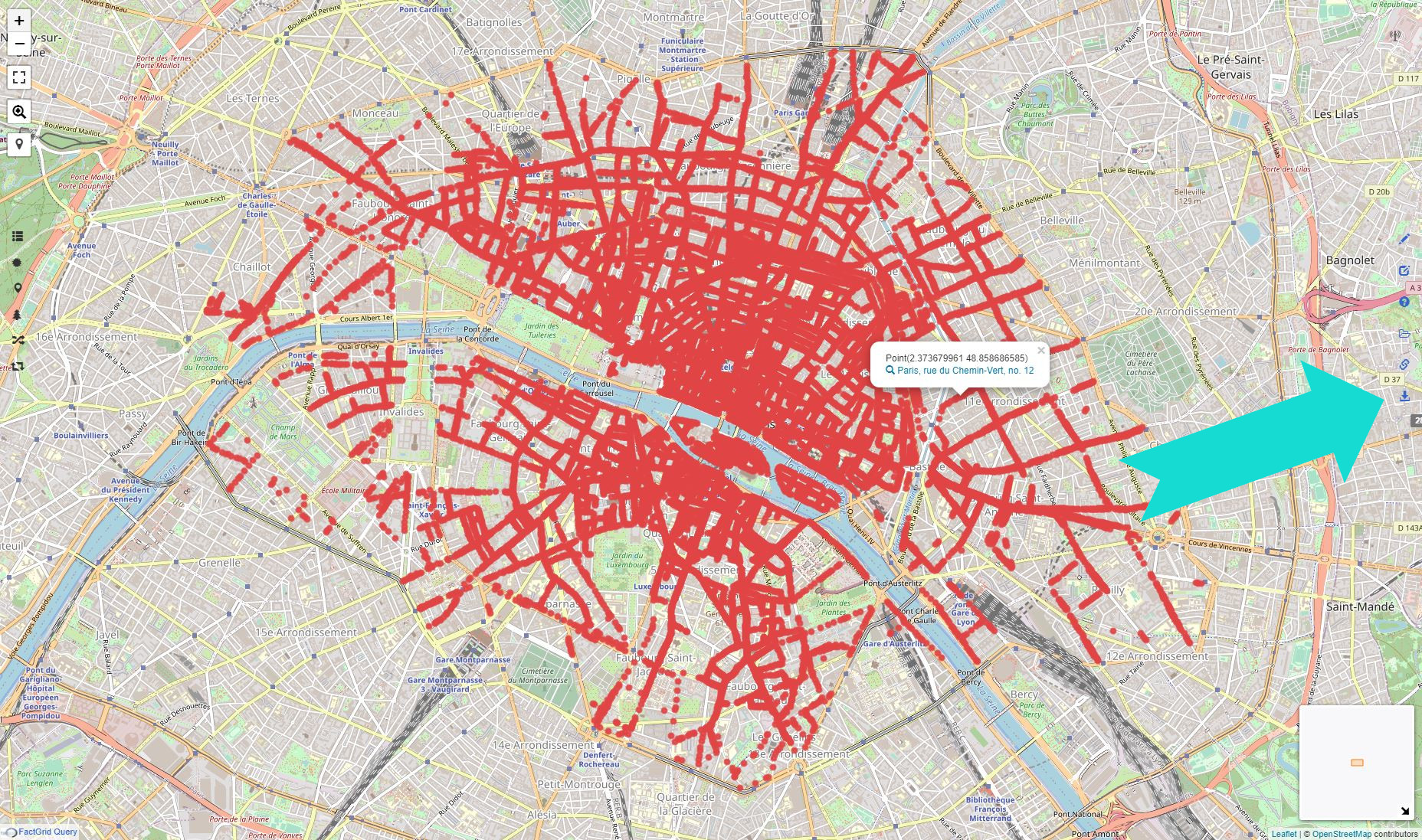 PARIS TO DOWNLOAD  comes with a double purpose: it is first designed to provide a dataset for historians to download with one simple click. Click the image below and a SPARQL query will bring the addresses of Paris c. 1830 onto a modern map.

On the right hand side you will be able to activate the menu that allows you to download the raw data behind this visualisation to your computer. TSV or CSV are the practical formats here. TSV (table separated) data can be copied and pasted into any spreadsheet. The download will come with the geographic coordinates and the address names, CC0-licensed and ready to use in any software environment of your choice…

…which might, however, not be the most interesting use to make of this data set. It should be far more attractive to create your own visualisations here on FactGrid with information you can put on any of the items underneath the visualisation. You will need an account to augment information on this data set and we are eager to open these accounts to all researchers working on historical Paris.

The collaborative project that we are offering here is still in its infancy. Its aim is to make resources on the history of Paris available to the general public, and more particularly historical data on Parisian roads and facilities. A lot of data exists on Paris but they are scattered and often difficult to access. FactGrid makes it possible to store, consult and retrieve them for free en masse and according to needs by simple queries.

PARIS TO DOWNLOAD  already provides a resource that will be of interest to all historians of 19th century Paris: a gazetteer giving the geocoded addresses of all buildings in Paris in the first half of the 19th century.

Some details below that might help to use the data set:

The history of house numbering in Paris

For a long time, urban addresses were identified by the names of houses and their signs (David Garrioch). Despite some attempts to number houses in modern times, it was not until after 1750 that real house numbering systems appeared in European and North American cities, and it was not until the 19th century that they became the norm for identifying urban addresses (Anton Tantner).

The house numbering errupted as a new element of rationality to order the city. As Anton Tantner and Reuben Rose-Redswood have shown, introducing numbers into the urban space is a ‘technique of power’ characteristic of the new governmentality that took hold in the second half of the 18th century. It was only later that the inhabitants themselves appropriated the new signage and made it a major tool for orientation and address location.

The history of house numbering in Paris is part of this general history of numbering (see Numérotation des immeubles de Paris). The first numbering system in Paris, introduced in 1779, was the work of a private contractor, Kreenfelt. This system is sequential by street and follows the course of a horseshoe. The doors, not the buildings, are numbered. In 1791 this first system was abandoned in favour of a system of house numbering by district (named section). In this system the numbers could be very large and the same street could have several identical numbers in case it belonged to several sections. Finally, because of these disadvantages, the system of 1791 was abandoned in 1805 and a new system was introduced on the initiative of the préfet Frochot, now inspired by the numbering system of Philadelphia

Although the 1805 system is still used in Paris, many streets were renumbered during the 19th century. The most important reform of Parisian numbering was carried out by the prefect Rambuteau in 1847. In addition, the incorporation of neighbouring communes in 1860 and the Hausmannian transformations considerably extended the house numbering compared to the initial state. Since the end of the 19th century, however, address numbering has changed little in Paris.

Parisian directories of the 19th Century

House numbering facilitated the making of address books and directories (see a list in the wiki Geohistoricaldata). The most famous one is the Bottin, the directory published by Sébastien Bottin. Each year since 1819, Bottin published the addresses of the trades and those of the most notable inhabitants (see document 2)

In 1834 Guyot de Fère published a Statistique des lettres et des sciences and the following year a Statistique des Beaux-Arts which gave the addresses of Parisian writers and artists. Numerous other publications provided the addresses of shops, workshops, schools, associations, etc. In other words, we have easily accessible sources for mapping the economic, social and business life of the city in the 19th and 20th centuries, provided we can locate the address numbers.

How to locate an old Parisian address?

Finding the location of an address is now a breeze: just go to OnStreetMap, Google Maps, or any other web mapping platform. You can also easily download for free the dataset of the current 150,000 Parisian addresses on the site Data Paris. But what about addresses of the past? If old addresses cannot be located, directories are of no use to the historian. It is therefore not surprising that this type of source has been little used in historical works on Paris until now.

The present data set has taught me some of the intricacies of locating Parisian addresses of the past. I leave aside here the difficult question of the location of Parisian addresses before the end of the 18th century. Let us see how it would be possible to proceed from the creation of the first house numbering system in 1779. It is easy to understand that the only possible method is to geocode the address, i.e. to associate the address number of each house with its geographic coordinates, but it does’nt get us very far: how do we know the geographical coordinates of an address? That is the question.

The problem of the maps

The only possible answer is: having a map. We can use current maps. Especially OneStreetMap is of good value here, as it displays house numbers. For example,  no. 6 of Place des Vosges where Victor Hugo had a flat between 1832 and 1848  (now the Musée Victor Hugo) was already  no. 6 at that time. The same for no. 10, rue Monsieur-le-Prince, where Auguste Comte lived from 1841 to 1857 or for  no. 8, rue de Caumartin, where Stendhal wrote his famous novel The Charterhouse of Parma in 56 days in 1838. The address of Eugène Delacroix’s studio from 1844 to 1858 is still at the same address, no. 58, rue Notre-Dame-de-Lorette. etc.

The majority of the address numbers of the early nineteenth century has not changed. But there are many exceptions. For instance, Stendhal wrote his novel The Red and the Black at no. 71, rue de Richelieu, which is now no. 69 of the same street (the original building has been demolished). Géricault’s studio was at no. 25, rue des Martyrs, which is now the no. 23. etc. But there are worse cases. A lot of old streets of Paris have been destroyed, reduced in size or extensively redesigned. For instance,  no. 27, rue Notre-Dame-des-Champs, where Victor Hugo wrote his play Hernani in 1829, had disappeared with the opening of the Boulevard Raspail.

The examples show that using current maps remains an unreliable method of locating old Parisian addresses. To solve the problem, we would like to have georeferenced historic maps of Paris displaying house numbers. Obviously such maps do not exist ready-made, but they can be created from two old collections of maps based on the excellent topographical survey realized by Verniquet in 1790: the Atlas Vasserot drawn up between 1810 and 1836, and the Atlas Jacoubet published between 1827 and 1839. Both of them indicate the house numbers (see documents 3 and 4).

The next step is the geocoding of the addresses. The work has been done on the georeferenced Atlas Vasserot by A.-L. Bethe (ALPAGE) in 2010 and the data set (about 28000 addresses) is available on the platform ALPAGE, données Vasserot. The team SIGParis18-19 has used its georeferenced map of the Atlas Jacoubet (transferred to the Atlas Verniquet of 1790) to geocode the Parisian addresses of 1789 (about 23000 addresses). The methodoly is explained in an article with some applications (Anne Varet-Vitu, Mathieu Marraud, Éric Mermet, 2020), but the dataset is again not yet published. I would add that a wiki project Localisations parisiennes (1780-1810) was launched in 2017 by Dominique Waquet to make a street-by-street inventory of Parisian buildings during the  Revolution aiming at a future geocoding of the addresses following the numbering system of 1791, but so far only the addresses of the rue Saint-Honoré have been located.

The Parisian addresses on FactGrid

Each of the 28000 Parisian addresses on FactGrid  is a Q-item. The form of its label is  :
“Paris, street name, no. #”
and its description indicates the numbering system and the initial time (most often 1805). English, German and French labels and descriptions are available. You can also select these languages on the FactGrid viewer.

Each address has the following  linked data:
1. the street , 2. the quarter, 3. the city (Paris), 4. the numbering system, 5. the geographical coordinates (WGS84) with the parcel ID as qualifier and the reference to the dataset “Données Vasserot”; some items are additional linked data like the previous address at the same location.

Each street of Paris (for the period 1805-1850) is also a Q-item. See the example of the rue Saint-Honoré. The same for the quarters and the arrondissements (for the same period).

The project PARIS TO DOWNLOAD has put the dataset “Données Vasserot version 1 (2010, A.-L. Bethe), Alpage” on FactGrid (with the agreement of ALPAGE).

The dataset “Données Vasserot” is based on information collected  before the mid-1820s and does not include the addresses for streets opened after 1805. However, these addresses, for which the Atlas Vasserot is of no help, are in FactGrid.  Their geocoding is based on the Atlas Jacoubet combined with information coming both from the Dictionnaire administratif et historique des rues de Paris and from the Bottin of 1850 (this volume, unfortunately not yet available on the internet, contains a conversion table between the old address numbers and the numbers adopted after the 1847 reform of the house numbering). This geocoding is here work in progress and some streets and addresses are still missing.

For the moment, the Parisian addresses produced on FactGrid by PARIS TO DOWNLOAD are reliable for the period between 1805 and 1848. These data should be used with caution for the period after 1848, as the Rambuteau reform of the house numbering introduced many changes, even if they were mostly shifts of a few numbers. In addition, the incorporation of neighbouring communes in 1860 dramatically increased the number of streets and addresses in Paris. It would be very useful to undertake geocoding  all these addresses, but that is another task.

All the Parisian addresses can be downloaded by using the FactGrid query service.

If you have a data file with Parisian addresses (for instance the list of all Parisian physicians extracted from  the Bottin of the year 1825), you can download the 28000 geocoded addresses from FactGrid, match these addresses with the addresses of your file in order to collect the geographical coordinates and use your completed data file to create a map on your favourite GIS. OpenRefine makes the work still easier (an OpenRefine service will be available very soon on FactGrid).

However, the best option is to put your data file directly on FactGrid and to add a statement Address (P208) to each Q-item you have created, in order to benefit of all the power of the FactGrid database and query service. See, as a simple example, the eleven Parisian addresses of Auguste Comte.

As said in the beginning: The dataset is designed to work in any other software environment, but it is beyond that an invitation to aggregate information here on the site — on the address items and on the items of people and objects you are interested in and you would like to create and to interconnect within the data set. It’s free, open and collaborative.