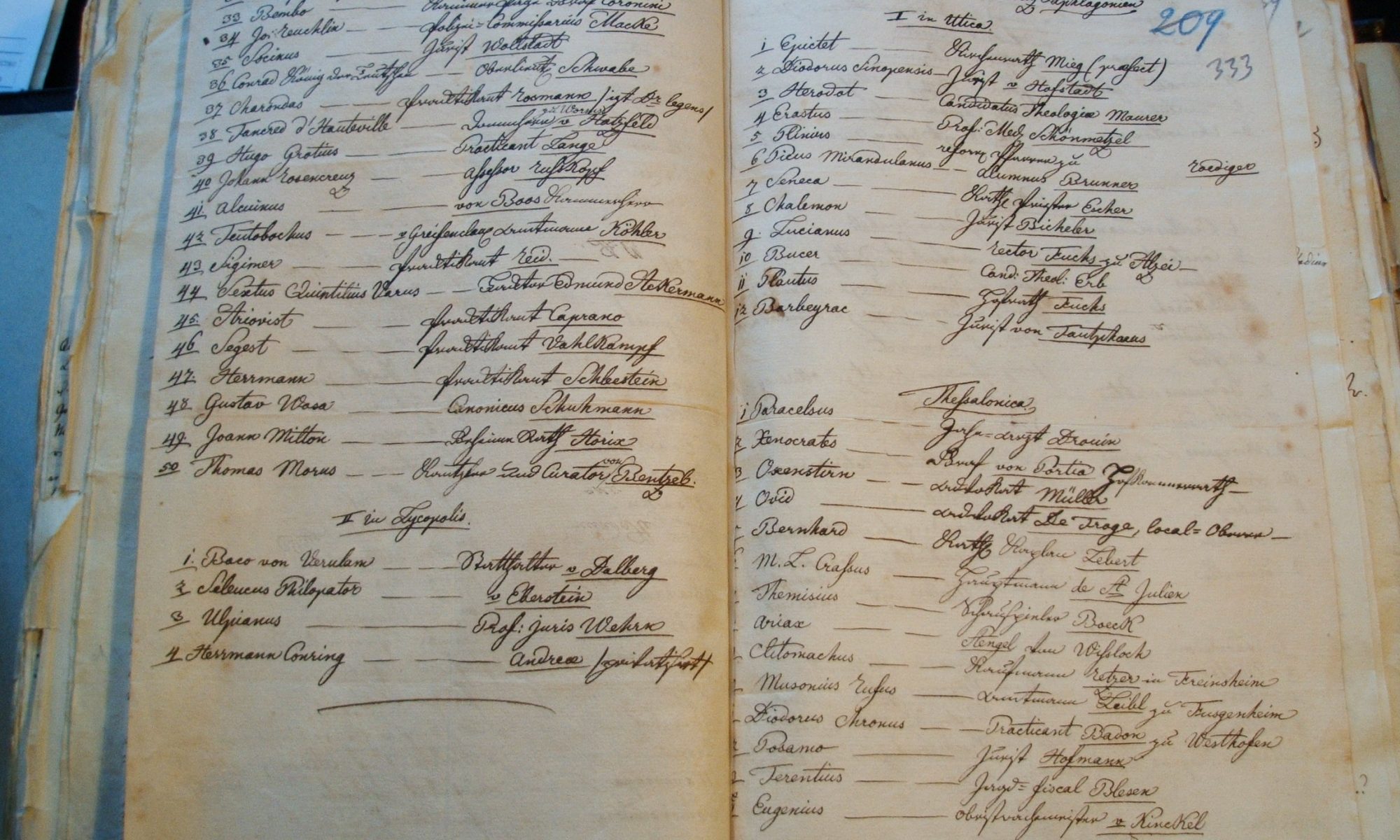 The FactGrid (still lacking a unique design) has, over the last six weeks, just received its first project data – data from Halle’s and Gotha’s Illuminati research of the last 20 years, which I will briefly outline in the following. Some of the datasets are still lacking the complexity we are aiming at, others have gained quite some depth:

We are presently listing some 2,000 people, about 1,350 of whom have been Illuminati members in the 1780s; the rest are mostly people mentioned in the correspondences which we are trying to map. We are hesitating here with the far more complex biographical input which he have in store, since this would be better done in joint ventures with the GND and with Katrin Möller, university of Halle, who has become the leading expert on 18th-century careers and professions. We are negotiating in both directions. Our roughly 2,000 titles of research on the Illuminati come in equally rudimentary sets. Again, we have realized that it would be more interesting to base this work on library catalogue norms from the outset.

But we are quite detailed with the more than 9,000 documents currently associated with the original Illuminati: documents that survived with the publications of Illuminati documents by the Bavarian state of 1786 and 1787 and with the archives of Adam Weishaupt, Johann Joachim Christoph Bode, of Gotha’s first lodge “The Compass”, and of Ernest II of Saxony-Gotha-Altenburg.

Some 3,000 of these documents received detailed and complex metadata on our database; they will shed light on Gotha’s Illuminati research of the last five years. Led by Martin Mulsow, Markus Meumann and I have been mapping and analysing Illuminati Essays collected in the “Schwedenkiste”, the famous “Swedish Box”. Our work had started with volume 13 and had soon moved beyond. Junior scholars had joined us with their research. Christian Wirkner dealt excessively with the minutes of the meetings collected in volume 15 and with exemplary strands of “Quibus Licet”/“Reproch” communication which the Order had designed to guide its members. Gotha’s research comes therefore with an emphasis on volumes 11 to 16 of the “Swedish Box”

The Gotha Illuminati Research Base, a conventional MediaWiki which we had set up in order to organise the team’s research became within a year of its existence the pool of ongoing work for the entire (small) community of Illuminati researchers. It attracted the first massive external data inputs: Hermann Schüttler offered us a list of members which he eventually connected with biographies to all our documents. He moved on with a technological relic: an Access database of the research he and Reinhard Markner had conducted for the two volumes of The Illuminati Correspondence (published in 2005 and 2013 respectively). These data are now the deeper layer under the special qid Item: Q11305.

Schüttler provides the following overview of this special database:

1. What is in it? Letters collected by a) Adam Weishaupt now located Hamburg’s State Archive, as deposit of the “United Five” (lodges) Hamburg, and b) the of the “Schwedenkiste”, – collected here by Johann Joachim Christoph Bode and augmented by Ernst II. of Saxony-Gotha-Altenburg, now located in the Prussian Privy State Archives, Berlin (formerly located in State Archive of the GDR, Merseburg). We have added any materials of the Illuminati context from other sources, where we could spot them.
2. Who has been working on this from when to when? The data was collected during the years of the IZEA project between early 2000 and mid-2005 by Hermann Schüttler and have been partially supplemented by Reinhard Markner.
3. Which archives have been visited? Hamburg’s State Archive, the Prussian Privy State Archives, Berlin, the Bavarian Main State Archives, Munich (Weishaupt letters in the “Kasten Schwarz” collection), the Palatine State Library, Speyer (collection Schwanckhardt).
4. Which publications are linked to this? The titles, which are listed under the qid Item: Q11305.

For the first time, the FactGrid can therefore present the tip of the iceberg of the Illuminati files online. Future projects will be able to add to this now that the grid is laid out – but we could also enter a far more dynamic process offering the digitized documents together with the metadata we have here collected. This will only be conceivable in a project for which the Grand Lodges and the archives involved remain to be won.

The creative part of the work can now begin

Compared to the previous MediaWiki, the FactGrid is structurally in one aspect at a disadvantage: The wiki offers transcripts and summaries of hundreds of documents and sessions of the Order (see here what we did with Document 70, Schwedenkiste volume 13 in our conventional Wiki and see here the respective database record: Item:Q6641). It would be exciting to make the transcripts available in the database itself. We will write out two work contracts, on the one hand to bring database information into the conventional wiki – on the other hand to develop a concept of how we could use the FactGrid as our sole repository for data, extended digests, transcripts and media files.

The database is otherwise far superior to the previous MediaWiki: It creates the grid which future research can use while it is opening the door to the data mining that can now begin. One will now be able to map the entire work of the Order between the late 1770s and 1788 (as far as it is still documented). It will be possible to examine membership careers (as soon as we get on with the personal data in greater detail): Who got into the Order on whose proposal? What kind of networking did members unfold within the Order at what stage of its brief existence?

The project will now need groups to bring their own research into the database. It should at the same moment begin to attract “data scientists” and “data visualizers”. And, of course: We are immensely curious about what information others will make visible where we can only offer our gut feelings and sketchy ideas of personal networks that developed in this web. The FactGrid blog will be a good place to present data analytics, which SPARQL enthusiasts can now do far better than the researchers behind the data resource.