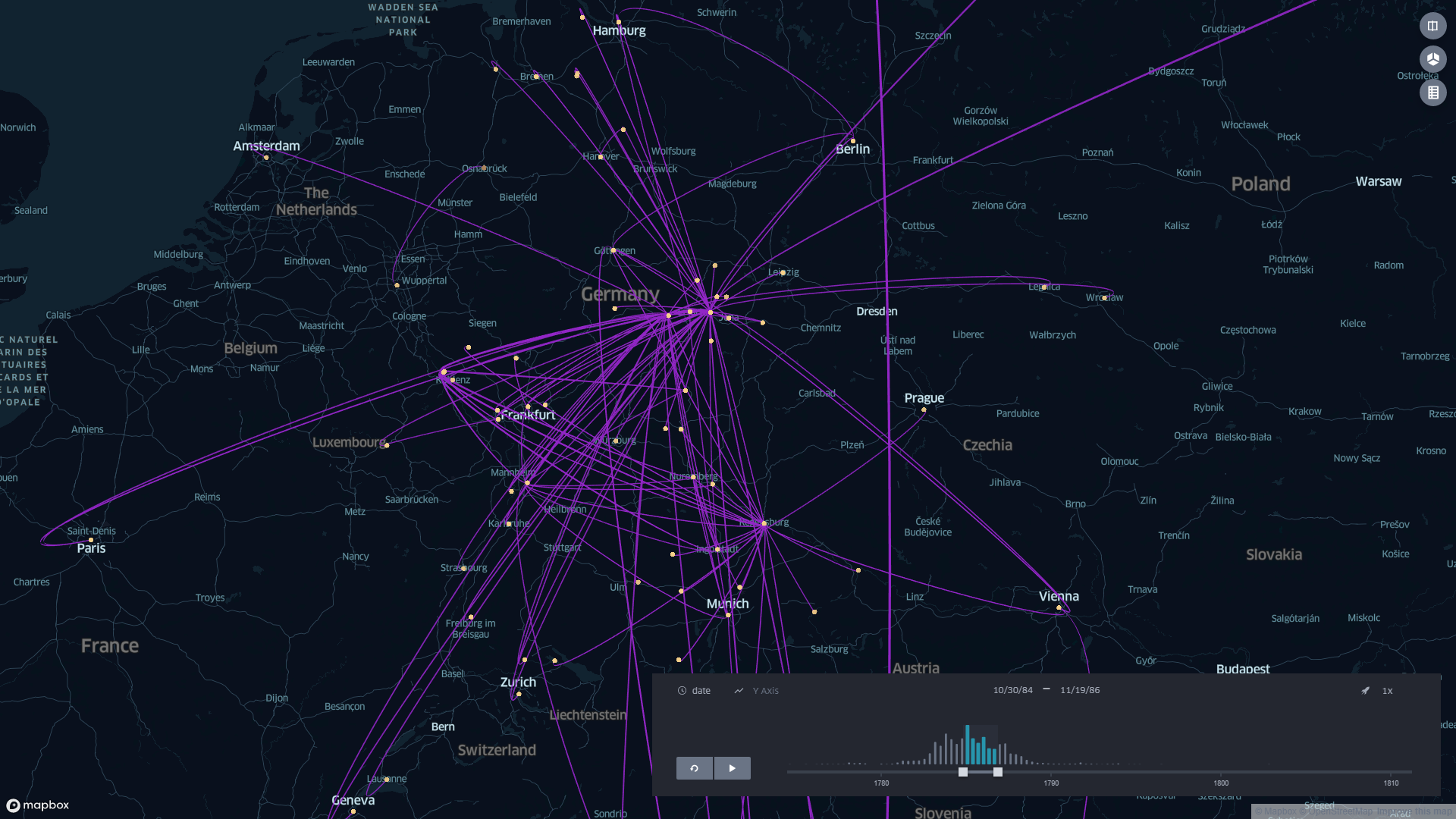 Paul-Olivier Dehaye scripted this visualisation for us (using Uber’s http://Kepler.gl). An html-file that captures all the Illuminati exchanges from the 1770s into the 1790s as far as we have spotted them (there are some misfits in this visualisation which we can now suddenly identify and which need to be eliminated on the database; the visualisation itself is basically a screenshot, it does not adapt to changes in the database).

The idea to represent letters in lines on a map together with a timeline on which the user can set a span that can then be shifted through the timeline – has become a classic in recent years: The Stanford Republic of Letters project seems to have been the first to come up with this visualisation ten years ago

Nodegoat is offering this visualisation as a standard aplication.

The visualisation is cool for correspondences since letters happen to travel on maps from senders to recipients (or to multiple recipients as soon as letters are forwarded – a standard procedure in all hierarchical Illuminati exchanges).

The simple visualisation which the SPARQL query service had yielded was already interesting to look at:

It showed the sender’s places of all known Illuminati letters and vaguely hinted at the Illuminati centres in Germany. But the picture remained static. It lacked the directions and the historical drama. You got more information if you clicked at an individual dot – usually this would open just a speech bubble with information about the particular letter that created this dot. But here and there one would see far more: a dot sparkling a fireworks of dots as in the case of Weimar (from where Christoph Bode organised the Order as the de facto leader after 1785/86). The beautiful bouquet is otherwise misleading – the dots do reach out to the various destinations; they stand for quantities which you only see if you hit the right dot (and which then obliterate much of the rest of the picture).

Letters – that is the charm of the more refined temporospatial visualisation – tend to come in correspondences and these evolve, they stretch out, they blossom, and they die eventually.

The Illuminati are an almost ideal object for this particular visualisation as they present a full case to study. The “Republic of Letters” had remained out of reach for the Stanford project. The thing which we today prefer to call “academia” or “scientific community” was far bigger than the carefully selected and spectacular cases that created the first visualisations in 2009 — and only the whole picture would have revealed the evolution of our present academic debates between the 1480s and 1800. Regions and emerging nations brought forth increasingly scattered cultures of learning and they invented modern national topics such as our present debate of (usually national) literature. The spectacular exchanges could not possibly reveal these developments.

The Illuminati correspondence is, admittedly, no longer complete. We are looking here basically at the archives of Weishaupt and Bode and the Bavarian publications of 1787 – but it is even in this selection a clearly and well defined object. You know when you have an Illuminati letter in front of you: The author uses code names and the (messy) Illuminati-Persian calendar. The Organisation created complete genres of letters such as the monthly “Quibus Licet” which every member had to hand in and which would be answered with a “Reproche” signed by “Basilius” two months later. The genres are as remarkable as the internal affairs discussed in these letters.

The Order itself was at the same moment basically a complex correspondence: an organisational construct that generated a particular and unstable flow of information. Paul’s time lapse encapsulates the history and the drama of the Illuminati: For about two years – from 1776 to 1778 – we see very little: Ingolstadt is the place where Weishaupt’s “Perfectibilists” could organise most of their affairs in face to face meetings.

The situation changed dramatically in 1778: The Illuminati opened a lodge in Munich and started to infiltrate the masonic world.

Again two years later, in 1780, we see Adolph Freiherr von Knigge rising with exchanges he is now maintaining from Frankfurt and then from Heidelberg.

Knigge wins Bode for the Order in September 1782 and Bode in turn resolves the escalating conflict between Knigge and Weishaupt in 1784 and 1785: Knigge is forced to withdraw but Weishaupt does not regain his former position as the head of the organisation. Bavaria exposes the Order in 1786/87 with the first two editions of intercepted Illuminati documents. Weishaupt flees to Regensburg and then to Gotha where he ends in personal ignominy while it remains Bode’s part to come to the conclusion that he would not reform the secret organisation which could no longer claim to be a secret society.

Paul’s abstract movie wants to be explored. You can define the time frame and push it manually through the timeline, and you can click at each line to see whose letter is creating it. We can now see the overall quantities and the processes, the organisation’s actual growth and collapse on the map.

The visualisation is state of the art and yet not much more than a show case at the moment. It is neither created in ever fresh queries nor can you use the html-page without some coding for your own questions.

The message, however is clear: The interface one would love to have with this visualisation could be far more simple than the present SPARQL query service. One would design it to always explore “correspondences” (P122—Q11243) and one would ask the user for simple P—Q specifications of his or her desired visualistion. In the Illuminati case this would be:

One might just as well ask for “author” and name a couple of authors, or for recipients, but the Interface would do the rest and run the SPARQL query of correspondences to generate a list of the letters in question with senders’ and receivers’ places and dates.

Paul’s message is that this can be done: The centre of his html file is basically a SPARQL-search from our database. Maybe someone will script the interface during the Wikidata.con next month in Berlin.

And one would love to have more…

Wikibase instances should invite the production of interfaces that can do certain jobs without bothering the user with SPARQL or Java proficiency. The cool thing about Wikidata or FactGrid is that these instances develop their (more or less) static ways to organise core data. We get more data but we continue to make the same useful statements especially if we have visualisations asking for these statements to be made with certain P- and Q-numbers.

Nodegoat would not lose any its charm if we began to offer similar visualisations; it will remain the software for the vast majority of projects that prefer the exclusive environment on which they can run exclusive and definitive presentations of their data. Wikibase instances are already very different beasts: They invite projects that want an open and growing landscape of data, and these projects will show the far bigger need of standard visualisations (i.e. of visualisations that use existing data and existing data structures). Projects on FactGrid or Wikdata need interfaces that already speak SPARQL. Time then to look at the more complex visualisations that are already running in environments such as the Stanford Republic of Letters Project or the Cultures of Knowledge Project in Oxford. We should act as the coolest competitors in this field, gather inspiration with the aim to inspire in turn.